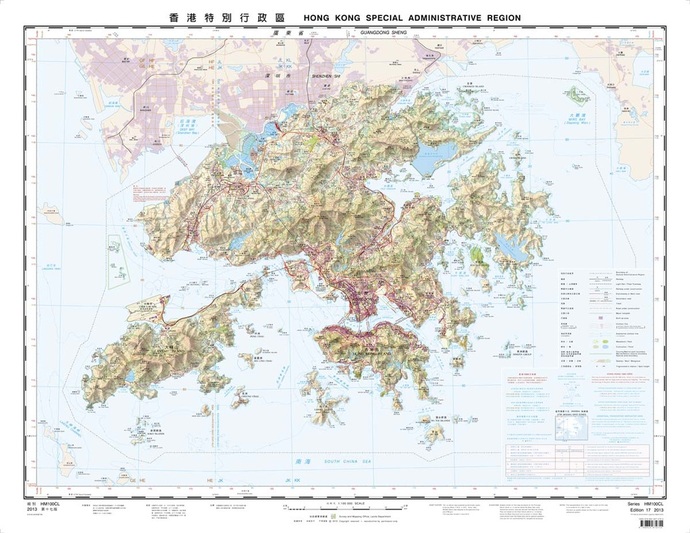 Hong Kong Topography. Source: Hong Kong Lands Department [Fig. 1]
Hong Kong enjoys a unique and spectacular topography as a mountainous peninsula. With the limited availability of flatland, the constraint of Victoria Harbor separating Hong Kong Island and Kowloon Peninsula, in addition to the extremely dense population (recorded as approximately 7 million in 2013), such an urban ecology definitely incorporates challenges or, in fact, provides opportunities to the architects and urban designers for new inspirations [1].

The idea of reclamation, which is a methodology to obtain extra flatland by mounding sand to the seabed, was introduced during the early age of British settlement [2]. Although it was seen as one of the most powerful and quickest responses to the hilly landscape, the methodology failed to cope with the fast- growing population trend and the continuous demand for flatland. Besides, such a methodology has intensively been criticized to be disastrous towards oceanology by environmentalists. Consequently, Metropolitan Architecture elements, especially vertical expansion, has dominated the urban form in Hong Kong ever since. 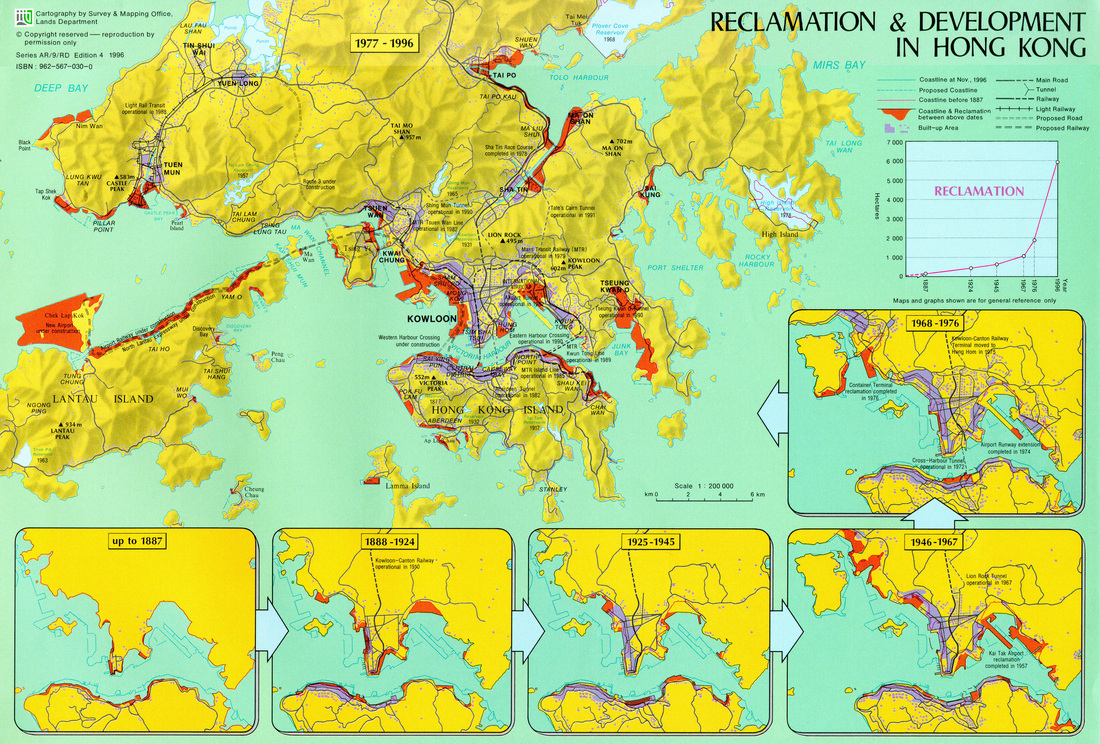 Hong Kong Reclamation History. Source: urbanphoto [Fig. 2]
HK's population increases at 150 people per day, and it is estimated that 713 ha of land must be settled in the next 30 years to accommodate this. The government faces land creation options such as converting existing rural/agricultural/wild land, creating artificial islands, and expanding the coastlines through reclamation.

As a product of Colonial rule, HK used a leasehold land system, in which the government acted as a landlord for all land (except for the St. John's Cathedral). Under British rule, this meant that the landlords of HK were responsible to London.

Land reclamation started in 1842 following the treaty of Nanking and was mostly concentrated in Hong Kong Island and Kowloon due to the lack of flat land. The land was claimed bordered the steep hills around Victoria Harbor. Post WW2, HK experienced larger-than-anticipated population growth, so Britain opened up the New Territories, inland areas to the north of Kowloon and some islands, to residency development. Population grew by a million  per decade. In 1971, the government announced the first ten-year housing policy incorporating the New Territories.

First part reclaimed was the Shatin Cove shores. A small channel connecting to the Shing Mun River was left unclaimed, and this new land was designed to accommodate 550,000 people. However, the Government had difficulty distributing the land between HK residents moving in from the metropolitan area and the so called “indigenous villagers”. For a time, the villagers, mostly farmers, were given special protections against land being used for urban development. In order for the government to acquire land from the villagers, they needed to write a contract outlining reimbursement in the form of land exchange of monetary  compensation. This built trust between the colonial government and villagers. During HK's shift to HKSAR status, the Chinese required the colonial government to fulfill all contracts and ended this system.

Another motivation for land reclamation is transportation. The West Kowloon Reclamation project in 1997, just before return to China, was associated with the Port and Airport. Development Strategy to make land available for building airports and railways. Land was reclaimed using marine sand.  Although planned in 1970, the project was later seen as a way to boost public confidence under Chinese rule after the Tiananmen Incident of 1989. [1]

In 1987, the government initiated the Metroplan to redevelop over-populated metro areas  including Kowloon, Hong Kong Island, New Kowloon, and Tsuen Wan New Town. The Metroplan's goal was to decrease the population density by identifying areas of potential growth, demolishing old buildings, and reclaiming land. The Metroplan was updated in 1999 with the Phase II study which reevaluated the data from initial studies. [1]

Switching back to the new definition of grounds, a manipulation of grounds has successfully calmed and redistributed the overwhelming population traffic on the single surface of streets. Elevated and sheltered pedestrian bridges, sometimes even installed with air conditioning, are one of the impressive urban forms in Hong Kong.

The Central Bridge, which connects some of the most important financial institutions and the Hong Kong MTR station, is one example with the busiest flow regardless the time of a day or the date of a week [2] [3]. Speaking of the MTR stations, which is the comprehensive underground mass transit system in the city, provide tremendous opportunities for the development of underground pedestrian tunnels. Similarity, these tunnels are well constructed and effectively reduce the foot traffic.

Besides, both the bridges and tunnels do not solely perform as an alternative mean of access. Very often, these pedestrian designated infrastructures are adjacent to a wide variety of commercial activities and hence stimulate economic vitality. Not to mention their interlocking dimension with different shop frontages, itinerant hawkers which embodied with local colors and characters are also commonly found on these pathways. Upon the creation of multiple grounds, it gives rise to the idea of multiple entrances. Such an idea is further enhanced by the phenomenon of tall buildings cutting off the hillsides.

For the sake of convenience, redistribution or actually attraction of pedestrian traffic, a plentiful of office buildings and shopping malls have more than one main entrance. Sometimes, these typical building forms divide the structure into upper and lower blocks. Ying Wa Girls’ School in Mid- Levels is a distinctive example which the floor plan is defined by two connecting blocks. One of the entrances is located on the 6th floor at the steep slope of Robinson Road while the other entrance is located on the ground floor down the hillside on Bonham Road.

Building Up and Compact Development 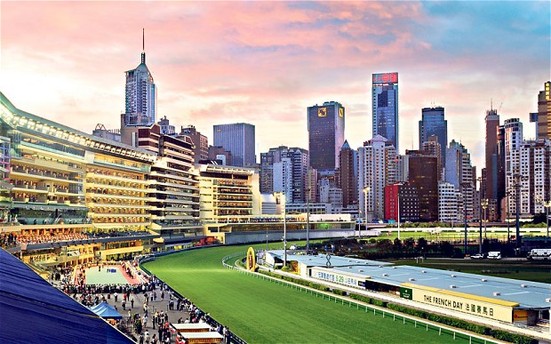 High Rise Stables. Source: Telegraph Media Group Limited [Fig. 7]
While Hong Kong reached a population density of 2.6 thousand per square mile in 2013 and still projects a continuous growth in the following decades, it is obvious that the ideology of multiple grounds solely is insufficient to correspond to the challenges of a packed urban environment [1] [2]. Again, with a restrain of the city’s geographic landscape, it is nearly impossible to build out, but rather to build up. A floor to area ratio of 8, sometimes up to 15, is a conventional standard [4]. Also, this building standard is not only limited to downtown area, but roughly the entire city.

To an extreme extend, not only Kongers live in high rise residential complex, even horses live high rise stables. With the fact that horse racing is one of the few legalized gambling activities in Hong Kong, its increasing popularity drives to a greater number of registered horses in Hong Kong. Stables proportionately occupy more space than regular residential development due to horses’ sizes, living patterns and sanitation considerations. Thus, even more careful planning is required. Additionally, the racetrack itself has already used up a considerable large piece of flatland among the site, this further adds up the pressure into planning for the Hong Kong Jockey Club, the institution for managing and promoting horse racing events. Consequently, the institution established a multilevel stables solution in 1996, to accommodate the horses as well as to resolve the conflict against the city’s compactness. The solution also adopted an extensive mixed use development. Apart from the stables, it also provided 7 levels of residences for the stables hands and a rooftop recreational space for the families [2].
Public Space
Sources