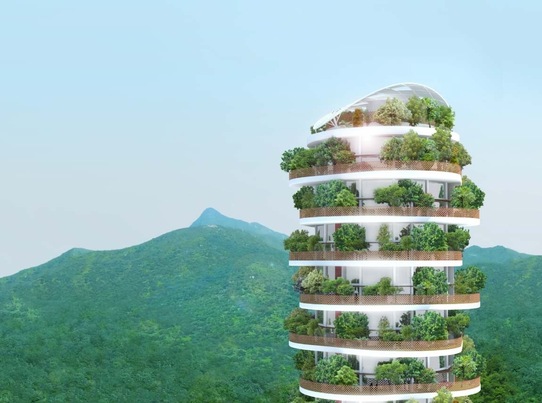 Tree House Concept [F1]
Following the urbanization of Hong Kong, a massive part of the natural topography was destroyed to make way for malls, residential areas, and industries. The natural vegetation of Hong Kong dwindled to a small amount, and the current layout of the city provides for less than adequate surface area for plants. Tree growth in particular is limited because of developed land in the city, though they still appear scattered throughout. [1]

Hong Kong has an area of 7,772 hectares and its most urbanized areas remain around the harbor where commercial buildings gather and two thirds of the population – 5.6 million – reside. Here, the land is sloped with hills and the coast is bordered with narrow flats. Urban growth began on the narrow flats grew towards the sea by way of reclamation and inland through terracing. Undevelopable and steep lands were left untouched or marked off as greenbelts or parks, and here natural vegetation continued to grow. Thirty-five percent of Hong Kong’s developed area is reserved as parks. In the less hilly terrain, lands were leveled off and developed. Urbanization occurred mostly after World War II, which created New Kowloon. Since then, about 70 percent of the Kowloon peninsula and New Kowloon (totaling 4,554 hectares) became developed, stopped only by the mountains flaking the north and east.

Thus, the original composition of forest cover, lowland tropical rain forests, and monsoonal facies have been removed. Years of farmers, cultivators, and recreationalists, have damaged the rainforests, and the introduction of invading species to urban areas – bred to withstand the climates of Hong Kong – have severely diminished woodlands and native species. [1]

The movement towards returning these trees to the city is gaining momentum. The distribution of trees currently ranges from single trees growing from cracks between buildings to pocket areas of countryside within the city. The history of urban development and land use in Hong Kong has been the driving force in pushing back trees. However, it can also be what returns the population of trees back to the urban center. Some ideas to provide more areas for trees to grow includes the consideration of trees during government public housing building projects. Space between high-rise structures can be saved for planting, where in older buildings vehicle and pedestrian use creates conflict of use. Plans for rejuvenating old structures from World War II with trees, the inclusion of greeneries, placement of trees in open spaces, and the Land Development Corporation may play an important role in seeing these ideas through. Dense concentrations of trees are not preferred for their inconvenience, and commercial locations layered with concrete roads and buildings provide no spaces for trees to grow, however the introduction and incorporation of trees into cities is a route preferred over designated natural reserves of forested areas segregated from the community. Green spaces benefit the lives of people living in crowded sectors, and their presence is refreshing and necessary, though a nuisance for some to consider in planning. Parks, green corridors, and open spaces are good elements for allowing the growth of trees. Preservation of existing pockets rather than completely replanting trees in areas is another course of action that would not only be less costly, but more effective. A naturalistic approach that protects what already exists – rather than destroying the natural and replanting them in preserved state parks – is the favorable route.

Thus a comprehensive and detailed landscape plan is needed to properly address these issues. Overall, a more educated generation valuing the natural environment of Hong Kong will bring forth its revival through proper urban planning.  [1] 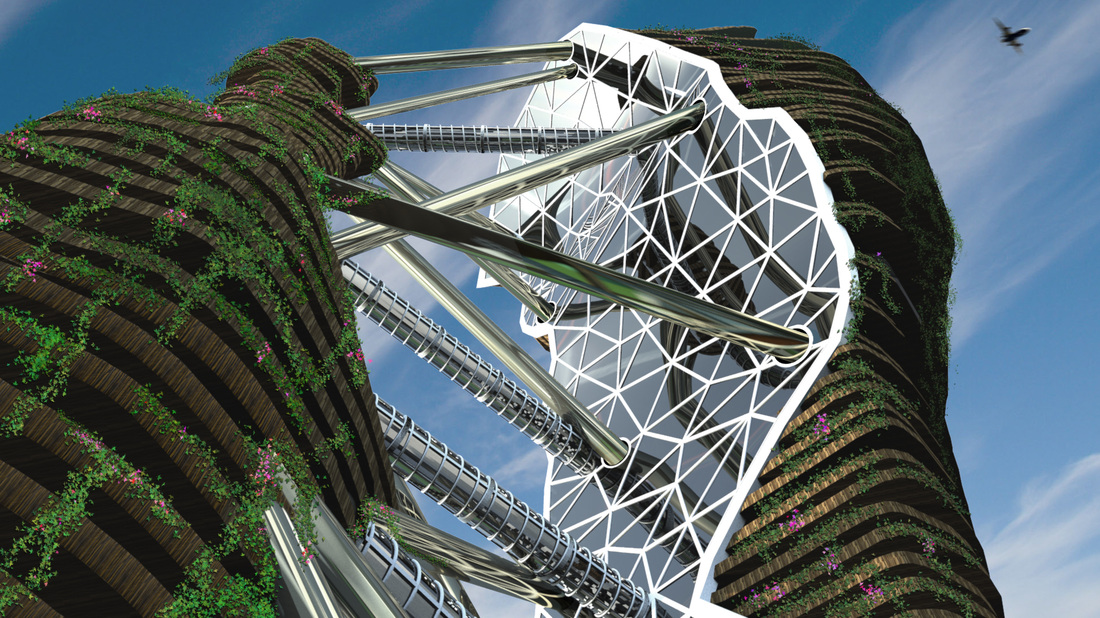 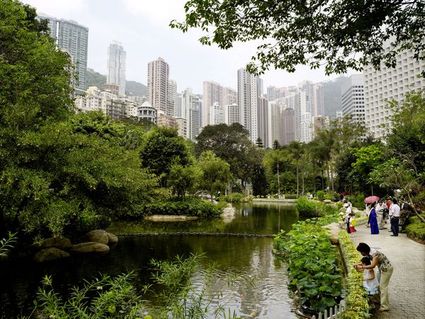 Hong Kong Botanical Garden [F3]
Beginning in the 1840s, Victoria Harbour grew inward from the narrow coastal flatlands along the north shores of Hong Kong. Influxes in population in Hong Kong have reinforced the idea of fully utilizing development space and building upwards. The old urban area around Victoria harbor has a density of about 26,600 people per square kilometer, reaching up to 116,500 people per square kilometer in the densest areas. The harbor is covered with high rise buildings and little space is available for open areas. Victoria Harbour, once open space, has faced over development and natural landscape has been demolished.

In terms of plantable spaces (PSs), the urban core of Victoria Harbour is lacking in all possible forms – roadside plantable space, lot spaces on public and private land, open spaces on public land, and undevelopable pockets of land. Its narrow pavement roads and congested design do not provide strips of earth along roadsides for tree planting. Buildings lack lots for planting, and public buildings are densely packed with no room for vegetation. [2]

From 1841 until the end of World War II, few attempts were made regarding the construction of urban parks. Victoria Harbor’s first public garden was established in 1864 within central district, known as the Botanical Garden. In 1957, the charity funded Victoria Park was created almost in response to the rapid population growth. Yet, this large gap between the establishment of these parks, as well as the unwillingness of people to reconstruct Hong Kong’s city plan, reflects the disregard that many had towards urban greenery and protection. [2] 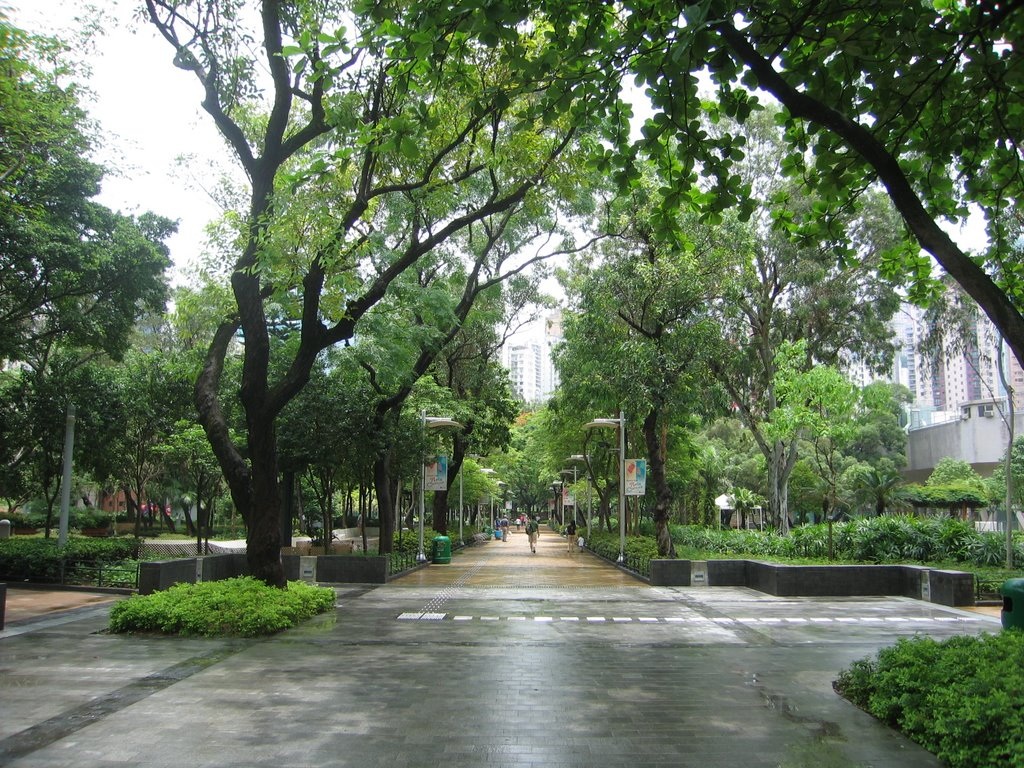