A brief look into the history of Hong Kong and the social, political, and cultural movements that influenced the momentum and direction of urban planning in the city. 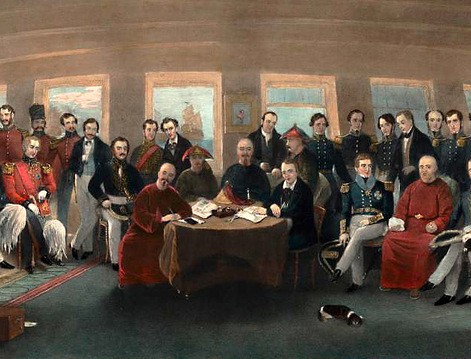 Treaty of Nanking. Source: MIT Visualizing Culture [Fig. 1]
With The Treaty of Nanking signed between the British Empire and Qing- dynasty China in 1842, The First Opium War came to the end. And, the fishing village, Hong Kong, first made its name to the international stage. Under the treaty, it stated that Qing- dynasty China agreed on the opening of 5 requested ports, the payment of indemnity, and of course, the ceded of Hong Kong[1][2].

Although the acquisition of Hong Kong might once seem to be regretful to the British, primarily due to the “mountainous” and “lumpish isle” topography, according to the British commentator Julia Corner[1]; the British still burned the bridge and proudly developed Hong Kong into a great city in many Kongers’ eyes today[2]. 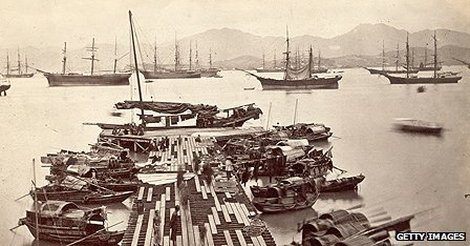 1898
China gives up more territories to the British giving them a lease on the land. [3]

1937
Hong Kong once again becomes a place for many Chinese residents to flee to due to the Sino-Japanese War as a result of the Japanese making intense movement into China. [3] 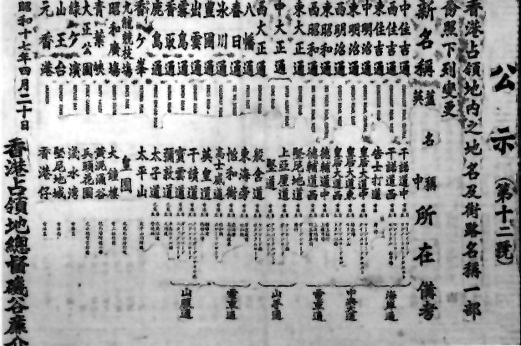 Hong Kong road names rewritten in Japanese [Fig. 3]
Prior to 1937, the British had control over Hong Kong and was in good relations with the merchant-gentry class as well as the wealthy circle of Chinese elite. The support of Eurasians and Anglicized Chinese for British rule was an important factor in influencing the Hong Kong public, though in the resulting years they would come to resent their imposed second class stature that prevented them from advancing in jobs. [4]

The Japanese invaded Hong Kong at the time of this social environment and ultimately the Chinese decided to side with the British. The British surrendered less than a month later however, and Japanese victory in 1941 resulted in an occupation that lasted until the end of the Second World War. After their victory, the armies and their allies – mostly gangs – plundered and raided the city, raping and murdering Hong Kong’s civilians. [4]

Into their rule, the Japanese won over the minority, gentry, and middle class groups who agreed to follow in hopes that businesses and livelihood would return to usual. The Japanese however found it more valuable to collect the resources of Hong Kong than keeping acknowledging their supporters and as a result, businesses, food supplies, and living conditions declined to dangerously low levels. Thus, a large part of Hong Kong’s population was forced to move out of the city into mainland China and its population dwindled. In addition, public buildings and facilities were converted to special uses for the Japanese, removing amenities like schools that Hong Kong needed. Hong Kong’s growth and economy shuttered to a stop. [4]

Towards the end of Japanese rule, the elite of Hong Kong were shifting towards support of the Allies in the Second World War. The British found this as an opportunity to return Hong Kong under its wing, and succeeded at the end of the war in 1945. With British rule came a recovery period through administration and laws and the population of Hong Kong returned to thrive. [4]

HK's government first seriously considered addressing public housing after the fires of Shek Kip Mei in 1953. The fires left 53000 homeless, mostly refugees from mainland China. Thus, the Shek Kip Mei Estate in 1954 was created, HK's first public housing project. [5] Population continued to grow at an unexpected rate, due in part to more refugees, so in 1961 the government approved the New Towns development plan to expand residential building in territory outside of Kowloon. This housing scheme was finalized as the Outline Zoning Plan. Examples of new towns include Sha Tin Town and Tuen Mun New Town. [6]

Hong Kong Institute of Planners was initiated in the mid 1970s and started operation in 1978. Its purpose is to represent the planning profession of HK. It is one of ten professional bodies that works with the legislative council. The institute’s objective is to promote and safeguard development and environment in HK in the best interests of the community, promote public awareness, promote education, ensure a standard level of competency within the professional community, secure confidence, and to cooperate with other institutes. [7]

In 1987, the government initiated the Metroplan to redevelop over-populated metro areas  including Kowloon, Hong Kong Island, New Kowloon, and Tsuen Wan New Town. The Metroplan's goal was to decrease the population density by identifying areas of potential growth, demolishing old buildings, and reclaiming land. The plan was significant because it incorporated population and potential growth studies on a district-by-district basis. The Metroplan was updated in 1999 with the Phase II study which reevaluated the data from initial studies. [8] 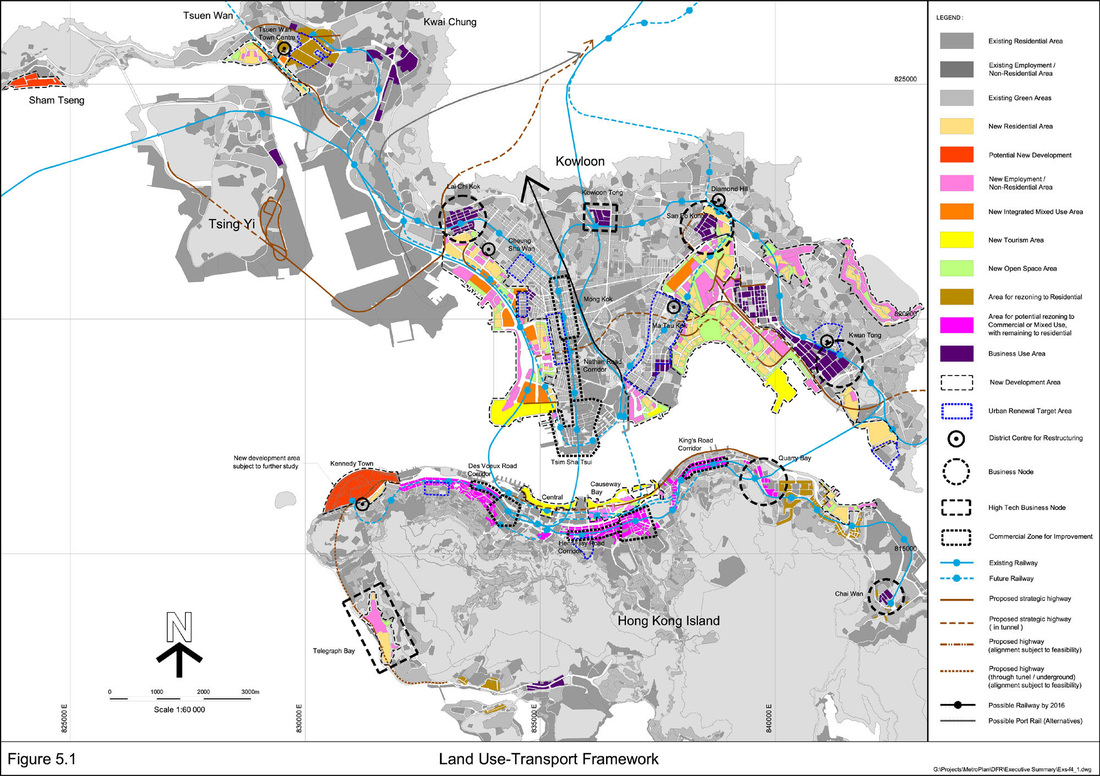 Hong Kong had been a British colony for over a century. Until 1984, Britain and China had both compromised and issued the Joint Declaration, which, stated that the sovereignty of Hong Kong would be resumed to China in 1997 together with the adoption of the policy “one county, two systems”.

The policy of “one country, two systems” was seen as the only rational or theoretical mechanism towards the contradicting political systems in the regions of China and Hong Kong. The policy entitles Hong Kong as a special administrative region that enjoys a high degree of autonomy, except for the issues of military and foreign affairs [9]. The policy also guarantees Kongers with existing lifestyles, economic prosperity and superiority as an international financial center for the following 50 years [10].

While Kongers thought their pride of once being a British colony and different from China was preserved, the policy actually partnered the regions with one giant step closer. In spite of the fact that Hong Kong has been enjoying the economics of scale from China, especially the extremely low production cost and the abundance supply of labors, the relaxation on the policies of One Way Permits and a slow but obvious enough threat on political autonomy degradation in fact resulted Hong Kong with tremendous impacts [9] Forgetting the complicated consequences on politics, these impacts have already brought in critical challenges onto the aspect of urban planning and design. 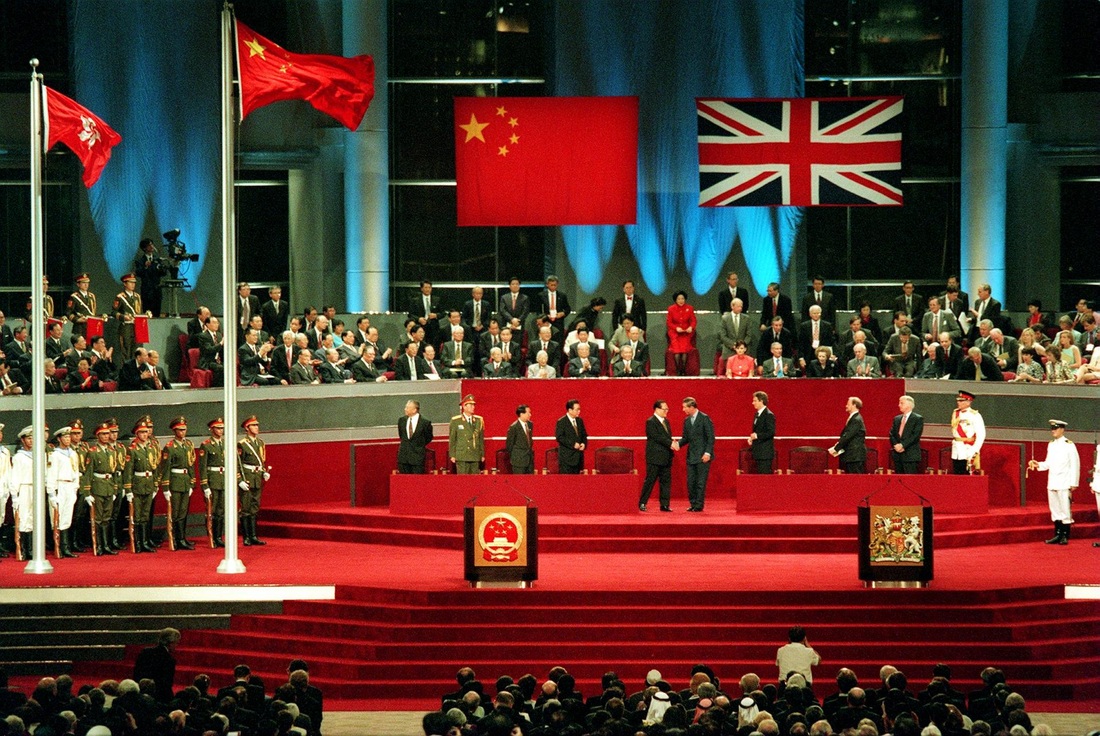